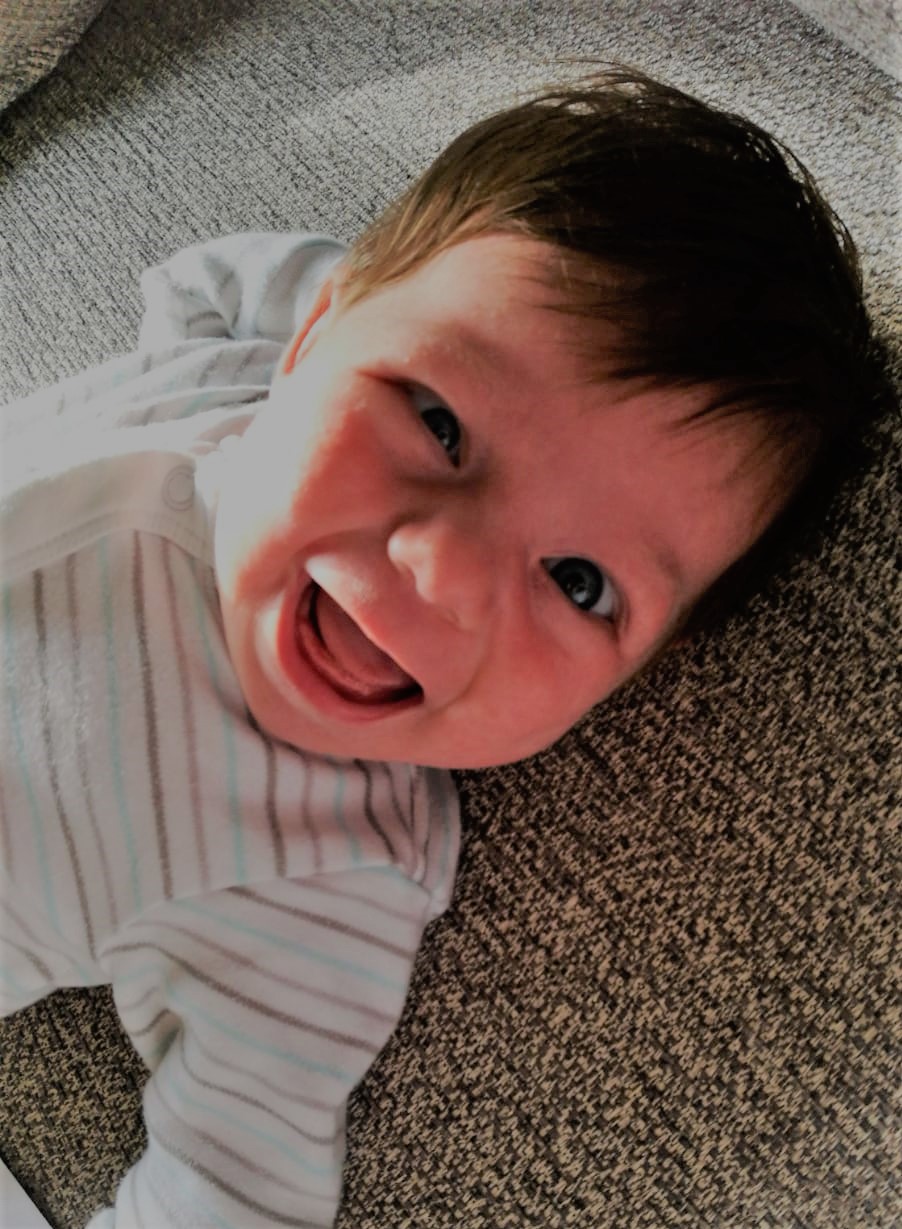 I can honsetly say it was an amazing experience! It is astonishing what both my body and little Renies’ did to bring her into this world.  I won’t lie, it was much much much harder that I expected and I suspect Renie did even more work than me!

My contractions first began on Monday evening around 5pm.  In the day I had been for a sea swim and then came home and decided to just relax, rather than do all sorts of crazy jobs, which I had previously been doing.  That should have been a sign.  I decided perhaps I should look into hyponbirthing as our due date was 2 days away, definitely too late in pregnancy to start wondering about this, but heyho thats me all over! I spent the afternoon doing breathing exercises, pregnancy yoga and eating chocolate! (something that needs to stop if I ever want to get back into my jeans!)

Monday morning Ben had a migraine, so rather than cycle to work I had dropped him off.  I was due to collect him at 5-30pm. I was just about to leave when I started to get what I would describe as intense period type pains below the bump, they came every 15 minutes or so.  Some how wisdom prevailed, (I am a bit of a doer and usually carry on regardless) and I decided driving was probably not wise.  I texted Ben, ‘please get the bus home,’ his thoughts went along the lines of ‘S*@t! NOT NOW I have a migraine!!’  Babies come when babies are ready!

When Ben got home, he started to time the contractions.  We both had a big meal once the realisation hit that these weren’t just braston hicks.  We would defintiely need the energy and then Ben sent me to bed to try and get some rest before what was to come, however it was little good because by this point the longest break between surges (contractions) was 8 minutes.  They were still very sporadic all night, ranging from super intense, insides turning out and being squeezed simultaneously (little did I know this was nothing) to a mere mild rippling.  They were anything from 3 minutues apart and lasting 30 seconds to 8 minutes apart and lasting 60 seconds.  Eventually we called the midwife, who arrived around 6am.  I was 1cm dilated (is that all) and so she left and told us to call back when the contractions were 3 minutes apart and 60 seconds each – for at least 30 minutes (or something like that, honestly Ben was in charge of this and all I did was press the buzzer on a bell when a contraction started and stopped.)

I vomited, A LOT. We thought at about 10am I should eat something for energy.  We tried dried frut and nuts, not bad and then one tiny little mistake, a chunk of chocolate. DO NOT do it!  Just as the chocolate melted in my mouth and made that cloggy seal, the mother of all contractions was upon me (it seemed it at the time anyway).  I managed to just make it to the bathroom, where I remained, face on toilet seat for a good 30 minutes.  Flashbacks to my uni days, hugging the toliet bowel and curling up in a ball on the bathmat. Except I couldn’t curl up in a ball and sleep this off, there is no way out, it is unrelenting! Ben managed to prise my face off the loo seat, after my protests. ‘It’s fine darling I cleaned the toilet yesterday!’

At 11am another midwife arrived.  I was so lucky that my community midwife who looked after us during pregnancy turned up.  What a priviledge to have the woman who saw me through pregnancy there to hold my hand and help deliver our baby.  Ellie is quite possibly the most laid back person I have met, must be a midwifery requirement.  Between 11am and 2pm everything is a bit of a blur, I was delerious, although apparently still not in active labour.  This is NOT something any woman wants to hear after almost 20 hours of contractions! My waters still hadn’t broken, so at the next examination, when I was still only 4-5cm dilated, Ellie broke them for me.  I had thought the contractions were intense before this, wow how wrong I had been! Now everything ramped up.  Renie had decided to turn back to back too, so as well as lower abdominal contractions, they were also in my back and radiating into my right pelvis and leg.

I spent my time moving from being on all fours on the bed, sitting on the toilet and being in the bath.  I tried to grab Bens manlyhood, he managed to maneover himself out of the way just in time, so I bit his hand instead. I did immediately apologise, honest!   Not long after this and me wimpering ‘I can’t do this’ and both Ben and Ellie replying ‘But you are doing this’ for the 100th time, Ben reminded me I did have options.  My birth plan was clear – minimal intervention, but after 20 hours I was exhasuted and I really felt ready to give up (not that you can when in labour, but I know my eyes were pleading to be taken to hospital and have pain relief).  My mind had jumped straight to epidural, not that I vocalisd this as I knew I would be disappointed if we went to hospital.  Ben again kept reminding me I had options, but I still didn’t get it.  Eventually Ben said ‘You have options, DOWNSTAIRS!’  The penny dropped, gas and air!

I got through almost 2 cannisters of gas and air, the intensity of contractions didn’t go, but I just didn’t care anymore!.  At this point I got in the pool and moved into the second stage.  Although the pushing stage requires a lot of effort and energy, it is also a relief to know you are in the final stretch and meeting your baby is imminent.  Pushing your babies head out takes all your power and strength, its primal and takes over your body, as were the noises I was making apparently!  There were times when I thought this is never going to happen, but when it does its absolutely amazing, words cannot describe.  Once babies head was out the final few pushes were easy, (not for Ben because he was literally holding up my entire body weight with his thumbs!)  First we had to wait for Renie to be ready, she needed to turn herself so her shoulders were at the right orientation and I could feel her wriggling, then whoosh she arrived and before I knew it we were a family.

Ben was my absolute rock in labour.  He made the appropriate amount of jokes, kept me smiling with his silliness. Tickled my back for about 24 hours (so much for all the massage techniques we had practised thinking I would like them), made a labour playlist, which I loved up until pushing stage. Never in my life did I think I would state ‘Turn this [email protected]*!”ing [email protected]*t off’ when listening to MJ, but I did! Always asked me if I needed anything, then noted himself it was at the crescendo of a contraction everytime, so waited patiently before asking again afterwards, the answer was usually ‘Yes Water!’ 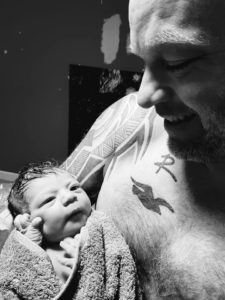 Ben and Renie 30 minutes after birth

I know my body went through a lot as did Renie’s, but never underestimate what yor birting partner did too.  He nearly lost the ability to ever make us a family of 4, almost lost his thumbs when I was pushing and literally held me up when I was in the bath and birthing pool!  Along with all this Ben had to deal with his emotions.  He had to watch me go through the most intense thing he will ever see me do.  He had to clean up afterwards and during labour (yes I pooped in the birthing pool – A LOT apparently) and most importantly he was about to become a father.  Yes there had been an entire pregnancy to realise this, but men are literally not connected to the tiny human growing in their partners tummy.  Its a lot to deal with a very short period of time. Ben I love you. 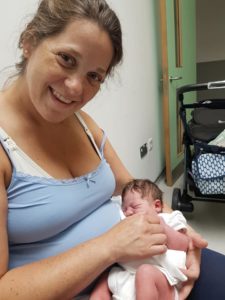 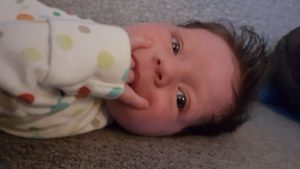 Renie 4 weeks old (sucks the same fingers that Mummy did!)